How to Quit Losing & Start Winning

Lesson One: Know Your Enemy

WE ARE AT WAR! 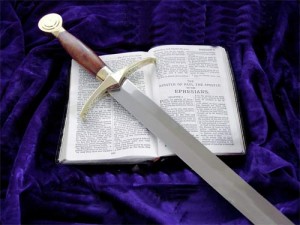 As Christians, we must be aware of the fact that we are involved in warfare. One of Satan’s main strategies has been to blind our eyes to the conflict we are in, and thus make us defenseless against his attacks. But God has given us every weapon we need to be victorious over our enemy!

2 Cor 10:3 For though we walk in the flesh, we do not war
after the flesh: For the weapons of our warfare are not carnal, but mighty through God to the pulling down of strong holds;

1 Timothy 6:12 Fight the good fight of faith, lay hold on eternal life, whereunto thou art also called, and hast professed a good profession before many witnesses.

It is important to remember that these weapons are not of the natural world. They are of the spirit.
Many of the writers of the New Testament used terms of warfare. These are not symbolic terms, but rather actual descriptions of the battle in which we are engaged. These battles are to be conducted in the spirit arena.

We are under attack from the enemy in all areas of our daily lives and relationships – in our:

One of the most important things to learn is that our warfare is not with people. It is against Satan and his evil spirits. It is in the spirit realm. Getting into conflict with people only leads to frustration and defeat.

WHO IS OUR ENEMY?

If we know that we are at war, it is important to establish who our enemy is.

The apostle Paul describes our enemy quite graphically.

Peter made it clear that our adversary is the devil.
1 Peter 5:8 Be sober, be vigilant; because your adversary the devil, as a roaring lion, walketh about, seeking whom he may devour:

The devil’s wiles are his schemes, strategies and plans of deception, which he uses against us. He has a military- type battle plan to use in his attempt to defeat us. However, as we become aware of his plans, we must become more aware of the armor and weapons that God has provided for our battle. The armor is for our defense. The weapons are for our victorious offense against our enemies.

Ephesians 6:11 Put on the whole armour of God, that ye may be able to stand against the wiles of the devil.

We are not to become preoccupied or overly impressed with the devil, his demons, or his schemes. Instead, we are to be occupied with Jesus. As we keep our eyes on Him, we will become aware of who we are in Him. As we become aware of our restored authority through Jesus, a boldness will arise within our spirits. We will not be intimidated by the devil or his schemes.

God is eternal. He has always existed and He is the Creator of all things.

John 1:14 And the Word was made flesh, and dwelt among us, (and we beheld his glory, the glory as of the only begotten of the Father,) full of grace and truth.

The “Word” is Jesus.

As the Son of God, Jesus created all things including the angels. They were not only created by Him, but they were created for His divine purpose.

Col 1:16, 17 For by him were all things created, that are in heaven, and that are in earth, visible and invisible, whether they be thrones, or dominions, or principalities, or powers: all things were created by him, and for him: And he is before all things, and by him all things consist.

When Paul listed thrones, dominions, principalities and powers, it was a reference to angels. He used terms that referred to their functions.

They have different titles:

They have different functions:

Lucifer’s original position was one of highest honor. One of his titles was Morning Star.

Isa 14:12 How art thou fallen from heaven, O Lucifer, son of the morning! how art thou cut down to the ground, which didst weaken the nations!

Job 38:7 When the morning stars sang together, and all the sons of God shouted for joy?

Both the prophet Ezekiel and the prophet Isaiah give us an insight into Lucifer’s description.

Ezekiel 28:12b Thus saith the Lord GOD; Thou sealest up the sum, full of wisdom, and perfect in beauty.

Eze 28:13a every precious stone was your covering, sardius, topaz, and diamond, beryl, onyx, and jasper, sapphire, emerald, and carbuncle; and crafted in gold were your settings and your engravings.

Eze 28:13b …the workmanship of thy tabrets and of thy pipes was in thee; in the day that thou wast created they were prepared,

Timbrels are the percussion musical instruments. Pipes are the wind instruments such as a flute.

Eze 28:15 Thou wast perfect in thy ways from the day that thou wast created, till iniquity was found in thee.

The prophet Ezekiel wrote what Lucifer’s original function was.:

Eze 28:14 Thou art the anointed cherub that covereth; and I have set thee so: thou wast upon the holy mountain of God; thou hast walked up and down in the midst of the stones of fire.

Even as the cherubs were on both sides of the mercy seat covering the Ark of the Covenant (Exodus 25:18-22), Lucifer was next to God in the place of greatest honor. As the Morning Star or Son of the Dawn, he covered and protected God’s throne and reflected God’s radiance and glory. He was anointed as a guardian cherub. He was entrusted by God to the place of greatest responsibility.

Understanding Lucifer’s rebellion, fall and the resulting warfare in heaven, gives us an understanding of the significance of the warfare that we are now engaged in on earth.

Eze 28:15-17 Thou wast perfect in thy ways from the day that thou wast created, till iniquity was found in thee.
By the multitude of thy merchandise they have filled the midst of thee with violence, and thou hast sinned: therefore I will cast thee as profane out of the mountain of God: and I will destroy thee, O covering cherub, from the midst of the stones of fire.
Thine heart was lifted up because of thy beauty, thou hast corrupted thy wisdom by reason of thy brightness: I will cast thee to the ground, I will lay thee before kings, that they may behold thee.

There was one will, the will of God, that ruled the universe until pride entered into Lucifer.

Isa 14:13 -17 For thou hast said in thine heart, I will ascend into heaven, I will exalt my throne above the stars of God: I will sit also upon the mount of the congregation, in the sides of the north:
I will ascend above the heights of the clouds; I will be like the most High.
Yet thou shalt be brought down to hell, to the sides of the pit.
They that see thee shall narrowly look upon thee, and consider thee, saying, Is this the man that made the earth to tremble, that did shake kingdoms;
That made the world as a wilderness, and destroyed the cities thereof; that opened not the house of his prisoners?

Until this moment there had been only one will in the universe – the will of God. In rebellion, Lucifer exercised his will in opposition to the will of God. As expressed in the five “I wills” of Lucifer, the deception and expression of his rebellion was progressive to the point of attempting to replace God upon the throne in heaven.

Rev 12:7-10 And there was war in heaven: Michael and his angels fought against the dragon; and the dragon fought and his angels,
And prevailed not; neither was their place found any more in heaven.
And the great dragon was cast out, that old serpent, called the Devil, and Satan, which deceiveth the whole world: he was cast out into the earth, and his angels were cast out with him.
And I heard a loud voice saying in heaven, Now is come salvation, and strength, and the kingdom of our God, and the power of his Christ: for the accuser of our brethren is cast down, which accused them before our God day and night.

Lucifer and his angels were cast out of heaven.

One-third of the angels were under Lucifer’s command and they fell with him. Other angels, under the command of Michael and Gabriel, remained faithful to God.

Rev 12:4 And his tail drew the third part of the stars of heaven, and did cast them to the earth:

Lucifer and “his angels” were flung down to the planet earth.

Rev 12:9 And the great dragon was cast out, that old serpent, called the Devil, and Satan, which deceiveth the whole world: he was cast out into the earth, and his angels were cast out with him.

The names of Lucifer were changed. Where he had been given such lofty titles as Son of the Morning and the Anointed Cherub, his names became:

The angels under Lucifer’s authority, those who followed him in rebellion, kept their organizational structure of thrones, powers, rulers, and authorities, but their names were changed to reflect their fallen nature. They were now called demons, devils, evil spirits.

Satan’s total nature changed.
He was:

This was all the result of his sins of pride and rebellion.

1. Describe the original function and position of Lucifer.

2. Describe his rebellion, fall and the warfare that resulted.

3. Who is the real enemy of believers today?